A bike tour between Schaalsee and the Elbe Valley 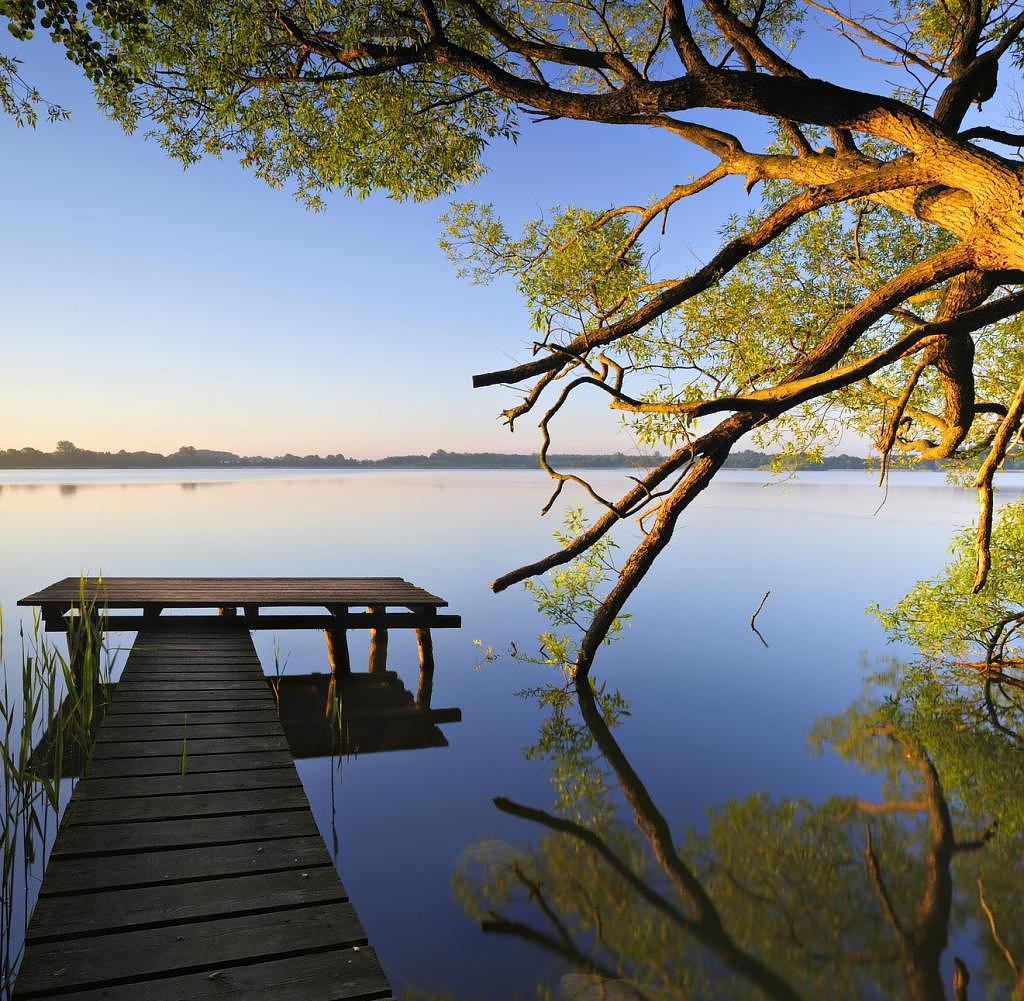 Shortly after the forest pool Probst Jesar the smartphone battery fails. And with that the voice of the digital route guide, who had just explained something that doesn't catch the eye: The "Jesar", Slavic for pond, owes its existence to a collapsed salt dome.

In earlier centuries, it was the undoing of some travelers when they watered their horses on the steeply sloping bank, lost their footing and sank 13 meters below the surface. Today, a forest pool operates here from May to September. The lake itself is harmless, but its water level has now dropped.

We are on the way in Southwest Mecklenburg on the Lübtheener Gutshaustour - a 45-kilometer circular cycle route - and follow the information provided by the "EntdeckerRouten" app. In addition to the route, it provides worthwhile information in image and sound at various waypoints. "An app that doesn't cost anything and doesn't track," promises Susan Müller-Wusterwitz, owner of Digitour, which produces electronic audio guides for museums and regions. You can download the desired route in advance, so you no longer need a mobile internet connection on the go.

Of course, the smartphone still needs electricity: It is probably a typical beginner's mistake not to have a power bank with you on such a long bike tour. And it's a bit of digital delusion in relying entirely on navigational aids. After all, there is also a lot to discover beyond the suggested routes.

For example along the European Cistercian Path. In the Mecklenburg area, it connects the biosphere reserve around the Schaalsee with that of the Elbe river landscape in Mecklenburg-Western Pomerania over a distance of around one hundred kilometers.

After a tour through the heart of Zarrentin on the Schaalsee with bathing area, boathouses and the brick monastery enthroned above, we continue along the Schaale. This is the name of an outflow of the lake, which is fed by numerous tributaries.

It is hard to imagine that the Schaalfahrt was an important economic factor in the times of Lüneburg salt production: barges brought salt and firewood back to the Baltic Sea via the Elbe, Sude and Schaale waterways. Today the little river is a nature reserve and mainly reserved for dragonflies, waterfowl and fish.

Those who leave the Cistercian path at Kogel and follow the tributary of the Kleine Schaale cycle straight from Mecklenburg's past into the future. At least that's what the comrades-in-arms of the cooperative "We are building the future" in Nieklitz promise.

"I deal a lot with utopias and this is the right place for that," says Lino Zeddies. Barefoot, in a hoodie and jeans, the tall organizational consultant stands in front of a honeycomb-shaped building that houses offices, a café and seminar rooms. All around ten hectares of wildly overgrown terrain, vegetable cultivation, bathing pond. "Since I've been here, I can work much better because I'm inspired all the time," says Zeddies.

The ecologist and environmental politician Berndt Heydemann wanted to create such a place of inspiration when he founded a future center on former farmland not far from the A24 motorway after reunification. However, the unwieldy name Human-Nature-Technology-Science attracted too few visitors despite being awarded the German Environmental Prize - and the adventure park went bankrupt.

For many years nature was left to its own devices, theft and vandalism caused problems for the buildings. Until the cooperative acquired the property and converted it - coworking spaces can be booked here as well as workshop and seminar rooms, there are various accommodation options, plus wilderness camps.

For the way to the workshop area, where buses are converted and "Tiny Houses" are built, Zeddies gets on one of the cooperative bikes and recommends the shortcut through the Nieklitzer Holz to continue in the direction of the Tüschow mansion. However, the forest path is very sandy and you wish you had a bike with wider tires.

The Mecklenburg-Schwerin Tourist Association says there are more cycle tourists and an increasing demand for cultural, historical and natural history tours. However, on this day only a young couple with a pram and a frighteningly loud quad bike are on the road between Tüschow and Schildfeld.

Maybe it's also the "suspender paths" that deter cyclists: a slab path on the right, one on the left, in the middle of the earth, on which it rolls with less vibration than on the slabs. The stop in Schildfeld is all the more welcome: the Schilde mill has been restored and now supplies electricity, the forester produces venison and the Schilde river has beautiful fishing spots.

If you are longing for bitumen-bound paths, you should say goodbye to the Cistercian path and continue cycling to Vellahn. A mighty brick church points the way from afar: It stands on a hill, surrounded by trees and a wall of field stones.

How does such a showpiece come to such a sleepy place, one might ask, but all doors are locked and are only opened on request: Pastor Christian Lange has to look after two other churches in the community. For relaxation, the pastor recommends forest bathing in two senses: Vellahn also has a public swimming pool in the middle of the forest area - and it is very close to the Mecklenburg Elbe Valley Nature Park.

From now on it goes steadily downhill, you can reach the Lindenstadt Lübtheen much faster than expected and there is still enough time for a city tour with the "EntdeckerRouten" app - at least as long as the battery lasts.

And so we are back at the starting point of this story, the forest pool Probst Jesar. Without smartphone guide. The next stop on the route is the former Jessenitz mine – but what awaits you there? Friendly local residents tell me what information the app can no longer provide, and even more: they tell me that the mine is now a bottling plant for cosmetics.

And that the numerous mine warning signs all around are more insurance relics than pointing to a real danger. With this information, you can enjoy the rest of the way through the heathland with peace of mind.

Destination: The Schaalsee biosphere reserve is halfway between Hamburg and Schwerin. The Mecklenburg Elbe Valley lies a few kilometers south of it in the Elbe MV river landscape biosphere reserve. The A24 motorway runs between the two.

Arrival: With the regional train, Büchen, Schwanheide, Boizenburg and Hagenow are among the nearest train stations.

App: There are various tours for cyclists and hikers in the Hamburg metropolitan region at discovererrouten.org, including the Lübtheen manor house tour. The links to download the app for iOS and Android smartphones can also be found there.

Nobody wants flat tires and jumped chains on a bike tour. The ADAC is now remedying the situation. Members can now also contact the Yellow Angels in the event of a two-wheeler breakdown.

‹ ›
Keywords:
DeutschlandLänderporträtsMecklenburgVorpommernRegionenporträtsFahrradtourenRadtourenZarrentinSchwerinDeike UhtenwoldtVellahnOstseeWaldbadSückauNorddeutschlandSchildmühleJens BüttnerNiedersachsenMecklenburgisches ElbetalTüschowHamburgBüchenSchildfeldSchaalseeMecklenburgische ElbetalA24Smartphone
Your comment has been forwarded to the administrator for approval.×
Warning! Will constitute a criminal offense, illegal, threatening, offensive, insulting and swearing, derogatory, defamatory, vulgar, pornographic, indecent, personality rights, damaging or similar nature in the nature of all kinds of financial content, legal, criminal and administrative responsibility for the content of the sender member / members are belong.
Related News