Scandal after comparison of right-wing Cartoon with a striker-drawing

"This is something that can not remain without consequences," said Harald Vilimsky, in an Interview broadcast by ORF on Tuesday evening. The FPÖ top candidate 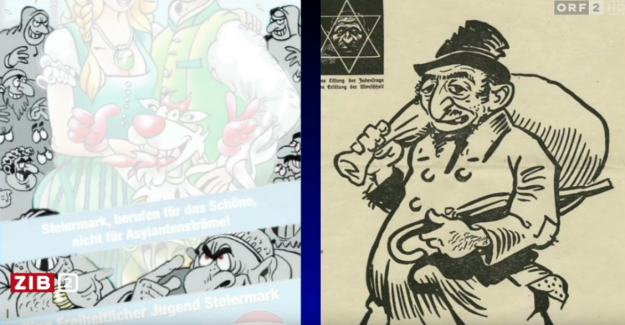 "This is something that can not remain without consequences," said Harald Vilimsky, in an Interview broadcast by ORF on Tuesday evening. The FPÖ top candidate for the European elections, has responded increasingly irritated on the interview guide by Armin Wolf, the well-known host of the program "Zeit im Bild 2". "Scandalous" and "tasteless": Vilimsky was outraged and railed against the presenter, who has regularly been in Trouble with the FPÖ .

the trigger for the TV-scandal, the comparison of the Cartoons of the Styrian FPÖ youth to Migration, with an anti-Semitic depiction of the Nazi sheet "der Stürmer". Both images show a dark looking Design with a prominent nose and thick eyebrows. The depiction of Muslim migrants in the FPÖ cartoon is reminiscent, obviously, of anti-Semitic Stereotypes from the Nazi-time.

Interviewer Wolf wanted to know how Vilimsky of the Cartoon-poster of the FPÖ youth. After all, Vilimsky is also Secretary-General of the Freedom. Vilimsky, then, is of "a Similarity" with the "striker"drawing: "That's bottom drawer," said the FPÖ-man. He saw his party to be brought in proximity to national socialism. And then, in the meantime, in the public debate in the much-cited threat of the FPÖ-leader fell. Vilimsky also criticized otherwise, the reporting of the ORF. They wanted to damage the FPÖ.

Wolf, who is on Twitter very active, widely used is a "courier"-article in the experts. "When I saw the poster for the first time, was my first reaction: it looks like the "striker"," about quotes of the political scientist Reinhold Gärtner (University of Innsbruck).

Controversial comparison: Cartoon of the FPÖ youth and a drawing of the NS-Hetzblatts "The striker". Screenshot ORF

Also on the day after the "ZiB 2"-Interview the anger of the FPÖ-politician was gone: "I Would be General Director of the ORF, I would not allow Such," said Vilimsky the TV channel to the news portal "Austria". On the question of whether he would fire Wolf, said Vilimsky: "I Would be the Director General, Yes."

Vilimskys verbal attacks provoked fierce criticism from the Opposition. "There is not a day on which the FPÖ is not sawing the foundations of democracy goes on," said the SPÖ-media speaker Thomas Drozda. Vilimskys blatant threats to legitimate questions as to the delimitation of the FPÖ against the national socialism to be another worrying step in the direction of illiberal democracy, Orban’shear embossing.

the left-liberal newspaper "der Standard" commented on the matter with concern. This is an attack on freedom of the media. And further: "The open threats of the FPÖ against ORF-journalists are a threat to democracy." The intimidation attempts of the current government against journalists, already showed the effects. In the Ranking on the situation of press freedom by reporters without borders Austria had fallen within one year from 11th place to 16th place.

After some initial Hesitation, also Austria's media Minister Gernot Blümel (ÖVP) to the statement of Vilimsky, that Journalist Wolf should be fired from the ORF: "The policy is not to interfere in the conditions of employment of journalists, totally regardless of the questions or interview guides to be assessed." ORF General Director Alexander Wrabetz took until now to the dispute between the TV presenter and the FPÖ.

This dispute falls within the context of the long-raging disputes between the FPÖ and the ORF. In the current debate to a new ORF-act, the government's party, threatens its always been as "Rotfunk" designated Sender with an abolition of fees. Journalists who are not from right-wing point of view, "correct", was asked at the time the notice of termination. And ORF-Journalist Wolf is since years a kind of enemy of Freedom.

In the night of Wednesday, had not reported the FPÖ-party leader and Vice-Chancellor Heinz-Christian Strache, via Facebook: "objectivity knows a Mr. Wolf. Both the Opposition as well as a handful of journalists put their own political views permanently about a democratic election result." Meanwhile, a prominent FPÖ to put-councillor of Vienna. "Wolf is a political party. The division is a faulty development of the Profession," said Ursula Stenzel, who used to be a "ZiB"-presenter. She had an interview guide, such as the Wolf have been practicing, as ORF-journalist, "in which Director", did not survive. (Tages-Anzeiger)