I have to my great regret, invested in a new bathroom through the Bauhaus. - They began 24/2 and the work had to finish 6/4, but the work is very delayed (7.5 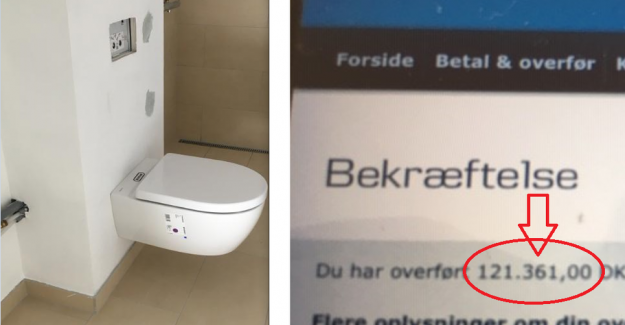 I have to my great regret, invested in a new bathroom through the Bauhaus.
- They began 24/2 and the work had to finish 6/4, but the work is very delayed (7.5 weeks), and is not yet finished.
- the Work has only been done in the weekends (from the pm. 07:00) and the majority of the craftsmen are romanians, who can not be communicated with, as they can neither be English or Danish.


- Their craftsmanship and finish is incredibly unprofessional and downright ugly.
Tapestry is about to fall of again, and which is not carried out the solutions that are agreed. Faldstammen is not relocated as described in the contract, and the tiles are not loaded as desired.
- And more parts are fitted even if they are wrong or corrupted. This applies both to the mirror, furniture and glass doors. The glass doors are ordered incorrectly for 3. time, and therefore, they are still not correct.


so begins Heidi N a letter to the nation! on a bathroom dream, which burst and a håndværkerforløb, she will not expose his worst enemy for. Heidi has several times contacted the head of the Bauhaus, to get him to get a grip on the project - in vain. And therefore, she hopes now that a mention in the Extra Leaf can help. Her letter - which the Bauhaus comment below – continues namely as follows:
- During the entire period there is no supervision from the Bauhaus, and it is only me who contacts them. the

- the construction manager has several times told me that the thing is finished, but when we check, it turns out to be a vertical lie.
- Never have I felt so much done for laughs, and I'm speechless over the fact that a large company like Bauhaus may choose to manage the project and my situation so unprofessionally.


- I have already paid 121.000 and left to pay 25,000, but I would like to have that they stop work and then I want my money back, writes Heidi. The Bauhaus believes that Heidi refers the process very properly and is ready to inspect the bathroom:

- of course It is regrettable that the work has been delayed. There have been delays on some deliveries and that the customer had changed his mind along the way, which have helped to delay the process.

- the Client has been able to use his bathroom from 24. april, though that was to be rectified in some detail. The builders have mainly done their work in the weekdays, and then is that after the agreement has been worked with mason and malerarbejdet in the weekend.

- We are not familiar with any wallpaper that is falling down. We have, according to customer's request, put tissues up.

- This is new for us, that the tiles are not located correctly, it will, of course, we inspect together with the customer and make sure to correct any errors.

- Faldstammen is not moved, because the customer during the process changed his mind and decided on a wall-mounted toilet instead of a floor mounted toilet.

- It is true that the painter did not speak perfect English, because he has come here from Syria. He is a resident of Denmark and has taken a painting qualification in Denmark in 2017.

- We (both our leader from Montageservice and varehuschefen) has continuously been in contact with the customer, and it is, of course, extremely regrettable that she is not satisfied with the process.

- The images that the client has sent with, is not such as it seems anymore. The thing is that been fixed up by mutual agreement with the customer.
- We want, of course, that the customer is delighted with his new bathroom, and therefore, among other things, has mounted a completely new glass wall to the shower stall in the next week.


- Furthermore, we have offered the customer that I personally, along with our leader from Montageservice, takes out to the customer when it suits her, and the agreements, how we are going in the goals of the project, so that she becomes happy with his new bathroom, write the sales director Palle Johansen and to the nation!, but what are you thinking?