Controversial abbreviations : AfD and the Left argue about the sticker in the Parliament 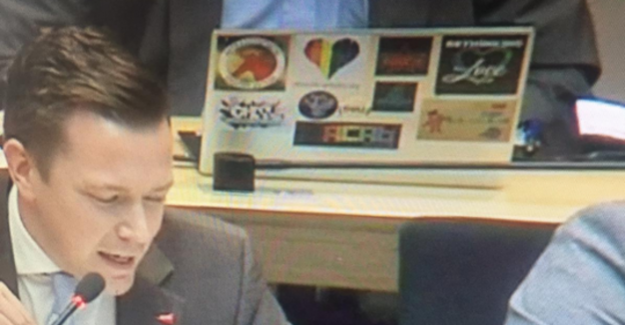 on the back of the laptop of a Left-wing members attached to the sticker with the imprint "ACAb" provides for the dispute in the Berlin house of representatives. During the AfD Deputy Karsten Woldeit was to the Left of the "Constitutional hostility", responded Niklas Schrader, interior policy spokesman of the Left group, with the sentence: "denunciation of the attempt of the art Philistines failed".

The AfD's Deputy Karsten Woldeit had started the dispute with a in the social network published a Screenshot of a contribution from the "Rundfunk Berlin-Brandenburg".

the criticism of The AfD sparked the abbreviation "ACAb". The acronym stands for the left-wing extremists are circulating an expression of "all cops are bastards", translated as "all cops are pigs". Because the Slogan is used in extremist circles, the smells, the AfD is a scandal.

On instructions, that the label to an action of the Chaos Computer club (CCC), responded Woldeit with the words: "the Perspective you can save yourself!"

Actually order the use of the abbreviation by the Internet activist falls in the range of the calculated taboo breach, as otherwise the AfD is practiced, and even with the strategy explained. The CCC Munich, explains on its Homepage: ""All Colours Are Beautiful" is an in-house development of the CCC in Munich."

there was a light installation, which is already years old. The largest Installation to date was installed from August until November 2010 in Munich, Germany.

it remains Unclear who it belongs to with the sticker provided with the Laptop. A demand Woldeit left unanswered, even in the published photo of the owner, or the owner is not identified.