Chicago: soybeans driven by sales to China and a weaker dollar

The course of the soybean side in Chicago rose strongly on Tuesday, helped by the announcement of sales to China and the weakening of the dollar. Those of corn The course of the soybean side in Chicago rose strongly on Tuesday, helped by the announcement of sales to China and the weakening of the dollar. Those of corn has also risen while those of wheat declined.

read also : Agriculture: the flop of the recruitment of pickers lovers

For Steve Georgy of the brokerage house Allendale, the market players are monitoring two main elements: trade relations with China and the weather. Us-china tensions have escalated this weekend, the head of china's public diplomacy waving the specter of a "new cold War" with the United States after criticism from Washington about its management of the pandemic Covid-19. What to put again in question the trade agreement partial signed in January between China and the United States, and providing for, inter alia, that Beijing substantially increases its orders of oilseeds produced in the United States. But the u.s. department of Agriculture has also expressed this Tuesday, big transactions, with the purchase by dealers of chinese 264,000 tonnes of soybeans in the total. He has also been ordered 216,000 tonnes of soybean meal for a destination is not specified.

the weakening of The dollar, especially against the brazilian real, was also likely to boost the progress of the soybean to the extent that this makes the oleaginous u.s. more competitive on the world market. The weather forecasts also remain in the crosshairs of the brokers, "with the United States, areas that are too hot currently, areas lacking rainfall, and others suffering from a surplus of precipitation," notes Steve Georgy. "The question is whether it is not necessary to begin to integrate a risk premium in the prices of agricultural products", he adds. 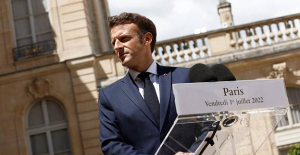