you accepted the offer to be tested, we will store your personal data, incl. prøvesvaret, in ten years after your death. - Residues from your test will also b 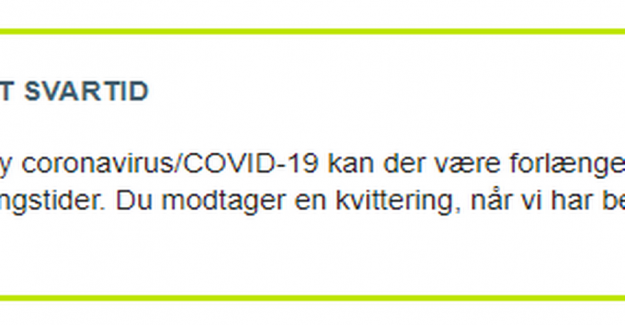 you accepted the offer to be tested, we will store your personal data, incl. prøvesvaret, in ten years after your death.

- Residues from your test will also be stored in the Danish National Biobank for use in future research.

How is that in the material, the preliminary 594,790 corona-tested, the danes have had the opportunity to see, as they booked a test-time on the website coronaprover.dk - if they clicked on a link to a pdf file and reached about on page three. And the procedure, there are several that seem a little too difficult:

- It is very sensitive information, which, in principle, can be used for all sorts of purposes other than coronatest and coronaforskning.

- But the thinking people are hardly on, and all of a sudden, have you actually made a new register – a biobank – without that it has gone up for people, says Thomas Ploug, a professor at Aalborg University for the medwatch.dk, who also have spoken with sundhedsordførere from the left and the DF, which seems the procedure might be more illuminating:

- You should already be at the entrance to a testtelt have the necessary information on the things being stored.

- And then you had to have stuck a slip in the hand, where they were asked whether they had to store one's samples – yes or no, says Liselott Blixt, and the Liberal party Martin Geertsen agree:

- instead of the people themselves must check and look on the net to find a place and sign from, should you return the cask on the head, so you should actively choose that they would like to let its samples be included in a research project, he says to medwatch.dk


On the coronaprover.dk, it appears namely, that one should join the so-called vævsanvendelsesregister, to opt out(!), and the nation! have asked in Sundhedsdatastyrelsen, how many in the corona-the months of april and may have signed up - compared with the same months last year.

In april and may 2019. it was 9 persons that frameldte out genome information - in 2020 that number had grown to 79. And out from this message, there has been a few days on the vævsanvendelsessregistrets website, you can probably count the number is increasing.

Screenshot from vævsanvendelsesregistrets website. It is here you can sign up, if you will frabee that others can see in your DNA.

the nation! in recent months the received a great deal of calls ( plus a typed letter, which you can see below) from the nervous danes, who vilhave focus on what the authorities are allowed to use the material. And Statens Serum Institut says to the nation!, there are very strict rules for application.

- the Tests from the test center Denmark is subject to the same rules and legislation as biobankens other prøvesamlinger.

- The rules prevent that the samples can be used in connection with investigations and cases.

- A rare exception is in relation to the identification of the victims, writes the serum institute, but what are you thinking?