80 years after Dieppe, the emotion of a young Canadian in front of his grandfather's helmet

On August 19, 1942, 6,000 Allied soldiers, the majority of whom were Canadians, sailed from the English coast towards what would be carnage: more than 1,000 dead, including 907 Canadians the same day (three times more than for the D-Day landings), and 2,000 prisoners in the hands of the German occupiers. 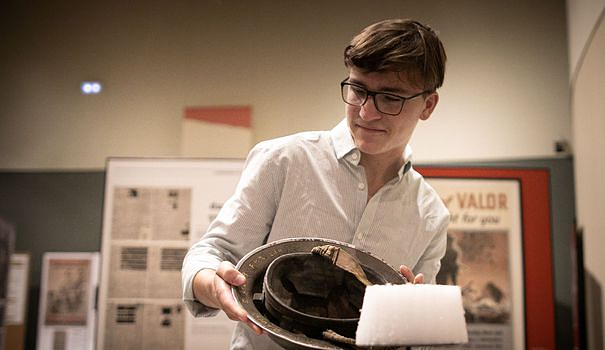 On August 19, 1942, 6,000 Allied soldiers, the majority of whom were Canadians, sailed from the English coast towards what would be carnage: more than 1,000 dead, including 907 Canadians the same day (three times more than for the D-Day landings), and 2,000 prisoners in the hands of the German occupiers.

Among them, Gérard Audet, 22 years old.

This 2.15 m colossus called "the big red" by his brothers in arms because of his red hair, who carried his brother on his shoulders during the "death march" on his return from captivity in Poland, was voluntary. Like all Canadians who participated in Operation Jubilee.

This great-grandfather, who died in 1989, Léandre Marsolais only knew him through stories.

And a large chest hidden all his life under his bed, whose family "never knew what it contained before his death", according to his great-grandson, before the latter opened it to discover the treasure buried too long.

Inside, handkerchiefs on which Gérard had drawn his dreams, his lacks, drawings "a little naive, typical of soldiers in captivity" according to Marie Eve Vaillancourt, curator of the exhibition "From Dieppe to Juno" at the Juno Center Courseulles-sur-Mer beach where the drawings and helmet of soldier Audet are exhibited.

The pride of this kid with his impressive historical knowledge floods the museum when the owner of the helmet, Hervé Fillu, puts it on his head.

One day in 2017, this collector of military objects, specialist in the Dieppe raid, seeks to authenticate a helmet, found in a Dieppe residence following an inheritance.

In connection with a Canadian who knows Léandre, he calls him on video to check the registration number on the helmet.

Bingo. On his computer, Léandre admires the relic for the first time, filmed on the very spot where Gérard spent the first night of his life on European soil, his first night as a prisoner, too.

Seeing it in person was a long-awaited moment: "it's very moving, I've been preparing for this for a long time," Léandre told AFP.

The helmet will be exhibited in Dieppe before returning to its Norman owner.

"It's important to bring history to life through these objects, that of these men who were only a few years older than me and who fought for a better world", declares the young man after finally being able to grab the steel bowl that served as protection for Geneviève's grandfather, her mother.

"Very moved", Geneviève, 53, discovered the story late in life, which Gérard testified with so much difficulty.

"While watching the war movies, my grandfather would sometimes tell me about a raid and how terrible it was," she said in a low voice, "that the sea was blood red, his comrades dying beside him. him, that he had the impression of being expected by the Germans but could not hide anywhere" she adds. "But he gave us very few details, especially about the captivity."

Because Gérard did not bring back only drawings from his more than two years of detention.

"My grandfather came back very ill, with mental and physical health problems, depression, diabetes," says the native Montrealer, now a librarian in Ottawa, who hopes it won't happen again.

"We are aware that we have had a lull in history, but we are worried about what is happening today with Taiwan, in Europe, to see the rise of dictatorships".

His son is of the same opinion: "when we see all the suffering endured by the soldiers who made this one (the Second World War, editor's note), we do not hope for another war".