50 years ago, the "abortion ban" trial in Bobigny

Marie-Claire Chevalier was 16 when she was raped by a boy her age and became pregnant. 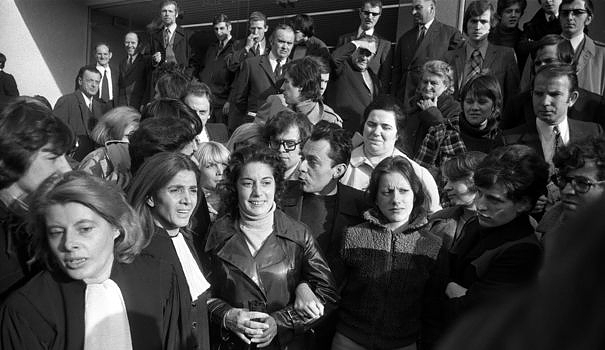 Marie-Claire Chevalier was 16 when she was raped by a boy her age and became pregnant. "I was forced," she says, adding that she does not want "a thug's child". Supported by her mother, an inspector at the RATP, the young girl has a clandestine abortion. "I fulfilled my duty as a mother, I had to protect my child", insists Michèle Chevalier who raises her three daughters alone.

But denounced by her rapist, Marie-Claire finds herself before the Bobigny juvenile court one morning in October 1972. Faced with very repressive legislation: abortion is then considered by French law as a crime of 'intention.

The case, "revolting", is the "perfect example to undertake a major political trial and to address myself over the heads of the magistrates, to public opinion and to the country to denounce the law", confides Gisèle Halimi , the girl's lawyer in a book interview with journalist Annick Cojean (A fierce freedom, 2020).

Voices also rise from the street: two days before the trial, several hundred people demonstrate in the Opera district in Paris. "Punches, blows with truncheons: nothing was spared them", relates Le Monde in an article reporting eight police vans, four gendarmerie vans and fifty-four arrests.

Men and women also present around Marie-Claire on the day of the closed-door hearing. "While I was pleading, I heard the crowd outside shouting (...): We all had an abortion! , Free Marie-Claire or England for the rich, prison for the poor, it carries, you know", says Me Halimi. “Like the anger I felt in front of these men who were going to judge us and who knew nothing about the life of a woman”.

Shortly before 11:00 a.m., the demonstrators try to break through the police roadblock which prohibits them from entering the courtrooms. In vain. But songs stigmatizing the fate of women "made to suffer" and slogans demanding "free and free abortion for all", "the pill for minors" envelop the court.

Quickly replaced by cries of joy and applause: around 12:30 p.m., Marie-Claire comes out. She is relaxed, a first. "I was scared," she admits on the steps of the Palace. “We sued for the ban on abortion!” rejoices his lawyer.

- I would have helped her

The following November 8, Gisèle Halimi puts on her dress again: it is the turn of Michèle Chevalier, two of her colleagues and the person who was in charge of the clandestine intervention, to appear. The long list of defense witnesses - the Nobel Prize winner Jacques Monod, the actresses Delphine Seyrig and Françoise Fabian, Michel Rocard, Simone de Beauvoir... - sets the tone for the debates. "We will not put the laws on trial," recalls the president. “I will do it,” retorts Me Halimi.

Abortion is not infanticide, argues Professor Monod, emphasizing that the right to give or not to give life belongs "obviously to the person who is called upon to give it". Paul Milliez, president of the Broussais - Hôtel-Dieu teaching and medical research unit, a fervent Catholic, assures us: "if Marie-Claire had come to find me, I would have helped her". He will be summoned by the Minister of Health and will receive a reprimand from the Council of the Order.

On two occasions, demonstrators tried to cross the police roadblocks.

"Has the wife of a senior civil servant, a famous doctor, a business leader ever been found in this courthouse? You always judge the same people, the Madame Chevaliers", denounces Gisèle Halimi in his plea. "This archaic law cannot survive. It is contrary to the freedom of women".

On November 22, the court renders its judgment: Michèle Chevalier and the person who performed the abortion are only sentenced to a suspended sentence, the two intermediaries are released.

Marie-Claire and her mother, arm in arm, face a swarm of microphones and cameras. "It's great, the judges have finally taken their responsibility. They have learned of the laws, that they were no longer applicable", rejoices Ms. Chevalier. From the top of the steps, Gisèle Halimi concludes, visionary: "The judgment is an irreversible step towards a change in the law".