This Sunday, April 24, will see the Fuente del Alcrebite become the venue for the development and execution of the I Super Sprint Duathlon Relay. 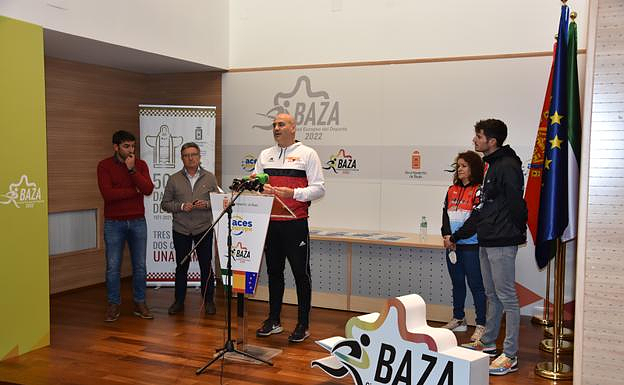 This Sunday, April 24, will see the Fuente del Alcrebite become the venue for the development and execution of the I Super Sprint Duathlon Relay. Nearly 40 teams representing different regions of Andalusia are already registered. That means that just over 100 athletes and their friends will be in Baza. This is another important sporting event organized by the City Council this season. It bears the European badge which distinguishes Baza in its category of European Cities of Sports (European cities between 1,000 and 250,000 inhabitants). The unique feature of this competition will be that it is the first to be held in Andalusia using this innovative format, which is very appealing for fans of this sport.

This first event will be a seed for larger events and will make Baza a benchmark for Dualton. The event presentation ceremony was held Thursday, in which Manolo Gavilan, the mayor of the City, Antonio Vallejo and Guillermo Hervas, Guillermo Hervas and the component Club Tijola Ociodeporte Baza and Juan Andres Cano Cuevas, announced this.

On Sunday, the test will take place from 10:00 to 12:00. It will be on a well-planned route that will be breathtaking and has been carefully planned for traffic management and signage. The mayor has detailed this and reported that access will be restricted to Benamaurel Road from 10 a.m. until 11:30 a.m. There will be alternative routes to reach municipalities we know are celebrating because there are many Bastetanos who visit them.

Each team will consist of three members. They will each have to complete each phase of the competition.

There will be an elite category for federated members and another open category that is popular among both men and women.

The director of the race and the Councilor for Sports both argued that Alcrebite was chosen because it "has characteristics of space and km that fit into this format." It is hoped that it will be as efficient as possible, and that traffic restrictions and inconveniences will be minimal. They add that the best thing about this event, is its speed. We can talk about it being completed in one hour. Juan Andres Cano insists on the existence alternative itineraries to ensure vehicles can pass.

Antonio Vallejo thanked Andalusian Triathlon Federation and Guillermo Hervas for their support. The involvement of Guillermo Hervas was also a great help, since it has been difficult to find the time and procedures required for an event with these characteristics. We are confident that it will be a success and that the event, due to its capacity and quality, will be a great experience for spectators and athletes alike. Juan Andres Cano was also acknowledged for his dedication to the sport. He believes we can be a reference in this discipline and has made it his mission. Victoria Vivar has also highlighted the increasing female presence in this sport.

The services of the test are made possible by the Qdeporte Gym, Ociodeporte Baza and Selectos Carnicas, who collaborate with the activity.

Manolo Gavin ended his speech by encouraging fans and the general public to enjoy the event, which combines the best of duathlon disciplines with power and teamwork.

Baza has a rich tradition of duathlon, thanks to the efforts of the Baza Multicultural Firefighters Association (FIREFIGHTERS PARK) and the Firefighters Association with the promotion and promotion San Juan de Dios Trophy. Each year, the activity is popular, inclusive, and participatory with all the modalities available for All. This federated duathlon, which will mark a long-distance route, is being planned.

‹ ›
Keywords:
EquiposParticipanBazaDuatlonRelevosSuperSprint
Your comment has been forwarded to the administrator for approval.×
Warning! Will constitute a criminal offense, illegal, threatening, offensive, insulting and swearing, derogatory, defamatory, vulgar, pornographic, indecent, personality rights, damaging or similar nature in the nature of all kinds of financial content, legal, criminal and administrative responsibility for the content of the sender member / members are belong.
Related News