The agony will be reflected in their faces. 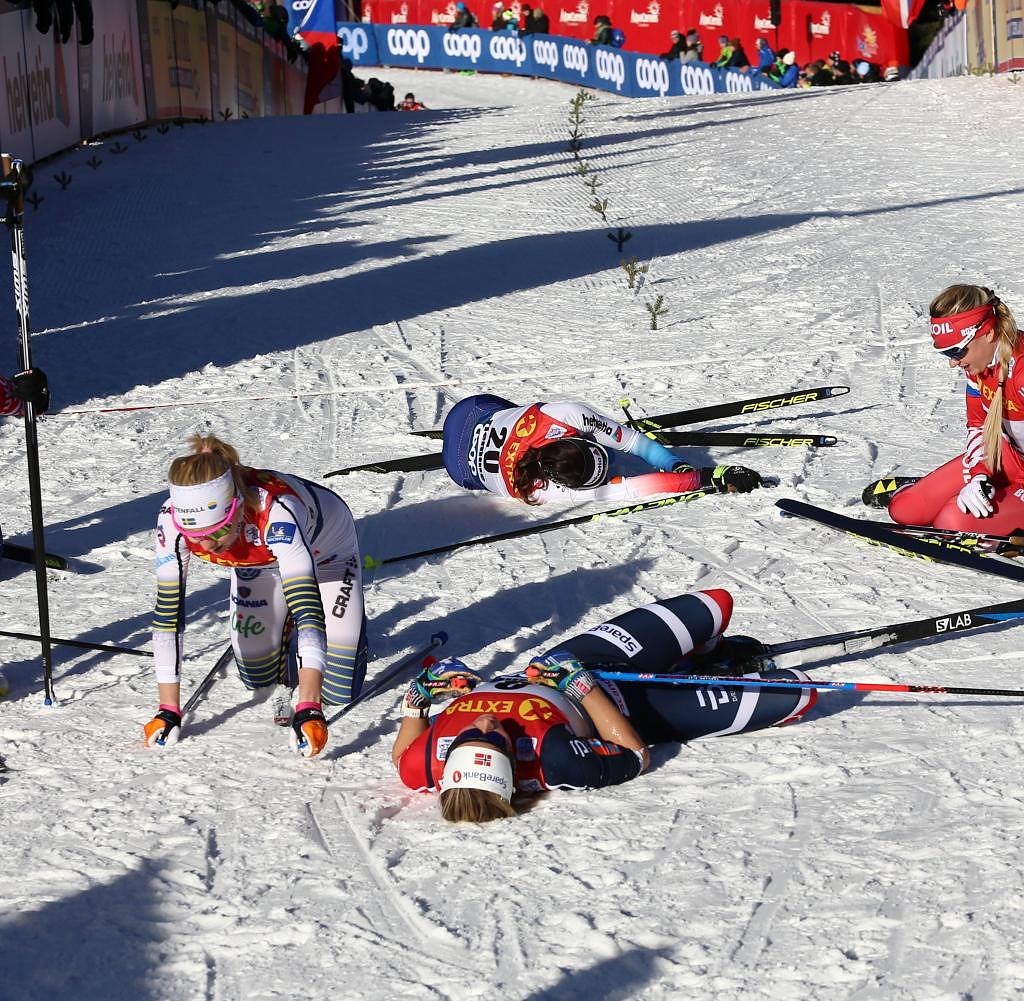 The agony will be reflected in their faces. Every step will be a struggle until the redeeming fall into the snow after the finish line. Final kilometers that will demand everything from you: When the cross-country skiers fight their way up to the famous Alpe Cermis on Sunday, spectacle is guaranteed. It is the traditional finale of the Tour de Ski, exhausting, prestigious, unique. A mountain finish like in cycling Alpe d'Huez. “Fight until the lights go out” was the motto of national coach Peter Schlickenrieder. And the Swiss ski hero Dario Cologna said during his active time: "I'm glad that I only have to do this ascent once a year".

In cross-country skiing, Alpe Cermis has become something of a symbol of suffering, the hallmark of the Tour de Ski. This Sunday, the ascent is back on the program - as always, as a spectacular finale of the Tour de Ski. And after a great race on Saturday, Katharina Hennig now has the chance to fight her way up the podium from fourth place overall. It would be the first time in the history of this stage race that a German finishes in the top three.

Since the Tour de Ski started on December 31, cross-country skiers in Val Müstair (Switzerland), Obertsdorf and Val di Fiemme (Italy) have completed a total of six stages. The penultimate Saturday was a triumph for Hennig: The 26-year-old celebrated the first World Cup victory of her career and the first of a German in almost 14 years in a mass start over 15 kilometers in the classic technique.

While the final stage for the women starts at 11am as a 10km mass start, the men will be sent out on the same route at 12.45pm. The Norwegian Johannes Hoesflot Klaebo could do something historic: he has won all six races of this Tour de Ski so far and has already set a new record. This has so far been five successes. Now he could complete his overall victory with triumphs on all stages. The best German in the overall standings is Friedrich Moch in eleventh place.

The Tour de Ski has been part of the World Cup calendar since the 2006/07 season and has quickly established itself as a highlight. They say the idea came about in the summer of 2004 in a sauna in Norway. There, the Swiss Jürg Capol, from 2003 to 2013 racing director of the International Ski Federation (FIS), and cross-country skiing idol Vegard Ulvang sat together after the 2004 Tour de France and hatched the plan. In 2006, Ulvang took over the chairmanship of the Fis cross-country skiing commission.

The similarities to the stage races in cycling are no coincidence: addition of times, time bonuses, the gold jersey of the overall leader, the mountain finish. Once a German celebrated as the winner: Tobias Angerer won the premiere event.

René Sommerfeldt made it to second place the following year and Axel Teichmann then third place. It was the time when the three of them were also at the forefront of the overall World Cup. Teichmann and Sommerfeldt won it once, Angerer was the best of the season twice. Friedrich Moch doesn't run in such spheres, but last year he surprised the legendary "Final Climb" on Alpe Cermis with third place.

Hennig now has to catch up a few seconds on Sunday if she wants to make her mark in the history books and climb onto the overall podium. These are the distances:

Head coach Schlickenrieder trusts her, but also says: "She should enjoy it tomorrow. What is still to come is an encore.” Although enjoying this stage is such a thing. Before the premiere in 2007, the challenge of the mountain arrival to the middle station of Alpe Cermis was something that had never existed before for cross-country skiers.

For 6.3 kilometers, the athletes take a run-up, so to speak, and then climb the remaining 3.7 kilometers to the finish: up a ski slope. To make this possible, several hairpin bends have been installed on the course, so that the route runs parallel to the slope in part, but this also interrupts the rhythm of the starters.

A total of 425 meters in altitude must be overcome on the ascent, three ramps in particular are tough - the steepest passage has a gradient of 28 percent. Anyone who breaks in between has no chance of regaining their strength.