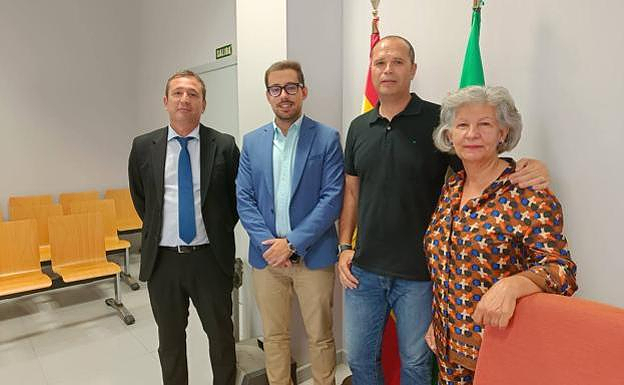 It's 10:30 AM and there are a lot of files on the table. These files pertain to gender-based violence cases at Roquetas de Mar court number 3. Here, civil and criminal cases are handled, but also gender-based violent cases are centralized. This judicial party. This court is the second most insolvent in Spain. It handles gender violence cases, according to Rafael Torres, the Roquetas lawyer.

The court is often faced with dramatic situations, such as 30 trials being held in one morning at a pace of 20-25 minutes each. This assumes that the court does not have a gender based violence guard. If an urgent case comes in, they would be forced to be suspended. Because the other judges are sharing many of their cases, and helping on duty, the situation is stalling.

The most extreme case is number 3, but there are similar problems in all the courts. This has resulted in unusual mobilization at the Roquetas Courts, which brought together lawyers, judges and other attorneys to fight the same battle. This problem causes extraordinary delays. A divorce can take up to four years. What this means for child custody and visits is that it also impacts delicate security issues like police investigations. Francisco Martin, a senior judge warns that due to the current situation, a Criminal Report in which the Civil Guard requests judicial actions against a person under investigation can take up to four to five months to reach a judge's table. So, "perhaps the measures they request are already meaningless." These are not the best times to fight growing crime in the region, where organized criminal gangs fleeing police pressure.

It is the daily life of "little Vietnam", as Roquetas de Mar is called in legal circles. This is a destination no one wants to visit due to the high level of litigation. Most of the current judges are from the last class. They arrive with no experience which increases the time it takes to process cases. Many processes are also slow.

This is evident in the case Roquetas, where the dean judge, who has been at the plaza for only three years, is an example. Francisco Martin Huete (holder of number 2) has chosen to remain for family roots. However, almost everyone leaves the municipality as quickly as possible. Staying means giving up promotions, which is why there are so many media cases that have been through more than half a dozen judges within the same time period. Martin says that "when you start, you feel more insecure, and that makes it more difficult to think about things," and that complex procedures can cause "burn", and if they don't know that they won’t be around for a long time, they won’t look at it. The next judge will do the same."

Claudio Garcia is the head of court number 5. He is one of the young people. Given the difficulties in his job and the lack of promotions, he says he will likely leave the district as soon as possible. He believes the key to stabilizing the templates is the promotion of magistrates. He warns that dissolution could occur within two to three years as the judges reach the rank of magistrates.

The Government of Spain will be responsible for the upgrade of Roquetas' courts. This upgrade will need to wait until the arrival of the eighth court, according to the Subdelegation. It would enable experienced judges to stay longer or permanently in the destination. permanent. Permanent.

A promotion would also mean more resources. Each court would only be strengthened in administrative personnel, with reinforcements in common service, which the Board promised to begin as soon as possible.

The courts of Roquetas are the second-largest municipality in the province. It has more than 100,000 residents and supports litigation far above average. However, there are many deficiencies that make it difficult to explain. Judges denounce the fact that the procedures must be packed and sent by mail Almeria to receive a report. This delays the process. The prosecutor is only allowed to appear in Roquetas during hearings or when he is on duty. Francisco Martin, a senior judge, says that he sometimes asks officials to keep the procedures while awaiting the arrival of the prosecutor on duty.

It is also not easy to perform forensics in cases where they are required. In this instance, El Ejido's professionals only travel to Roquetas for a limited time per week. This slows down the work.

This category jump is the "float" that the senior judge deems the most important. It will help them improve a situation that is only getting worse. Martin Huete warns that "this is sinking" and highlights the efforts of security personnel, who are also working in extremely precarious circumstances. After visiting the existing facilities, the dean judge expressed his support for the Civil Guard barracks. He said that "my soul fell to the floor when I saw them", describing the conditions as "third-world". He also supports the establishment of a National Police Station, an inexplicable absence in a large city of over 100,000 people. This would, according to his perspective, be justified by the current pressures on Immigration.

The judges can't fight alone for better conditions and a stable staff. They also have the support and assistance of the lawyers representing the defendants, which is to say, attorneys and Roquetas delegates.

Rafael Torres (the representative of the lawyers) describes what's happening in Roquetas to be "aberrant". He explained to IDEAL that citizens' rights were not being protected. Torres believes what is going on exemplifies why the Rock municipality has closed its doors to citizens seeking services because of its proximity to capital.

The lawyer confirmed that the situation was so dire that Roquetas lawyers do not want to accept cases. This is especially true when they are surrounded by number 3 guards who know it is an adventure. We don't give appointments at the offices if we need to see someone in 3 because we don’t know when we will finish.

This is a problem also faced by attorneys who act as intermediaries and are present in court. Maria Dolores Fuentes Fuentes, her representative in Roquetas acknowledges that she experienced these delays firsthand. We have the lawyer and client, who push us to get their procedures moving. And then we find ourselves in court with an official who has collapsed and can't, and who must wait and wait, because there are no other means. This veteran attorney, with over 30 years of experience, says that all measures are necessary in Roquetas. "This is something chronic in Roquetas. It has been this way since the beginning, and this pandemic has only made it worse."

Everyone agrees that the pandemic has increased the workload of already-crushed courts exponentially. They also assure that the seventh court, announced now, will not suffice, which would hardly ease the pressure on the six other.

‹ ›
Keywords:
JuiciosMinutosPequenoVietnamJuzgadosRoquetas
Your comment has been forwarded to the administrator for approval.×
Warning! Will constitute a criminal offense, illegal, threatening, offensive, insulting and swearing, derogatory, defamatory, vulgar, pornographic, indecent, personality rights, damaging or similar nature in the nature of all kinds of financial content, legal, criminal and administrative responsibility for the content of the sender member / members are belong.
Related News