The daughter-in-law of the former head of government, Nur Sharmila Shaheen, said her family learned that he was taken to Kajang prison, located south of the capital Kuala Lumpur. 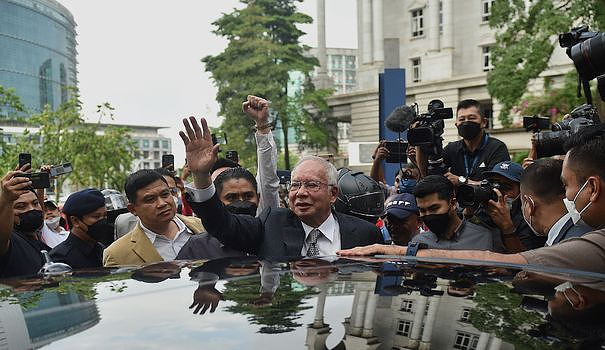 The daughter-in-law of the former head of government, Nur Sharmila Shaheen, said her family learned that he was taken to Kajang prison, located south of the capital Kuala Lumpur.

Despite his conviction at first instance, he had never been detained.

"My stepfather asked us to take care of the family. He stayed strong and calm," she says.

Federal Court Chief Justice Maimun Tuan Mat, speaking on behalf of the five judges, said the court found that Mr. Najib's "complaints in the appeal proceedings were without merit".

“Based on all the evidence, we find his conviction on all seven counts to be safe. We also find that the sentence is not disproportionately excessive,” she added.

The appeals are "unanimously dismissed and the conviction and sentence are affirmed", Ms Maimun said.

The Federal Court's decision came after the court rejected a last-minute request by Najib's lawyers to disqualify the court president, citing her bias.

Najib Razak was sentenced in July 2020 to 12 years in prison and a fine of 210 million ringgits (47 million euros) in the 1MDB case, a fraud with planetary ramifications involving several billion dollars.

As the verdict was announced, the 69-year-old former prime minister looked gloomy and dejected as he sat next to his wife Rosmah and two children.

Journalists in an adjoining room following the proceedings by video link saw Najib Razak surrounded by family members, friends and members of his party.

Outside the court, relatives and supporters embraced in tears.

Earlier in the day, when Najib Razak arrived in court, around 300 supporters surrounded his car chanting "bossku" - "my boss" in Malay - a rallying cry for those who came to his defense.

Just before the verdict, Mr. Najib, who said he had received an unfair trial, forcefully requested a two-month postponement of the trial so that he could properly prepare his defence.

During a break, he addressed his supporters, telling them: "if I am guilty, please forgive me".

According to analysts, the confirmation of his conviction could derail any plans to return to politics for the former Prime Minister.

"If Mr. Najib is found guilty, he will be banned from running in the next elections. Obviously, his political career is over," James Chin, a professor of Asian studies at the University of London, told AFP. Tasmania, before the verdict was announced.

"Under Malaysian law, Mr. Najib cannot stand in this election and the next election," he added, referring to speculation that polls could be held this year.

Elections are not scheduled before September 2023.

For his part, Oh Ei Sun, senior adviser to the think tank Pacific Research Center of Malaysia, believes that Mr Najib can obtain a pardon from the king.

"He can always ask for clemency (from the king)," he told AFP. "And if he is pardoned, as many expect, he could easily engineer his return, for his feudal-minded supporters are plentiful."

Mr Oh, however, made it clear that current Prime Minister Ismail Sabri Yaakob - who belongs to the same party, UMNO (United Malays National Organization) - should advocate for clemency.

This vast scandal had largely contributed to the electoral defeat of the coalition led by this politician in May 2018.

Najib Razak and accomplices were accused of having used for lavish purchases, ranging from real estate to works of art to a yacht, the money they are accused of having embezzled from the 1MDB fund, initially created to enable the development of the Malaysian economy.