After 16 vehicles were "trapped" by an "intense snowfall", circulation has been restored to the A-319 at Puerto de las Palomas in Jaen. 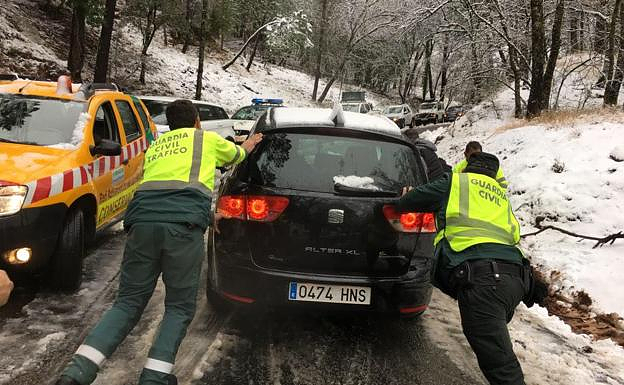 After 16 vehicles were "trapped" by an "intense snowfall", circulation has been restored to the A-319 at Puerto de las Palomas in Jaen.

According to the Armed Institute, a service was conducted this Friday by a patrol from Cazorla Post and another from traffic motivated in part by the intense snowfall in this region of the Cazorla and Segura Natural Parks.

It took place at Kilometer 34,200 on the A-319 highway. 16 vehicles were "rescued", and "trapped". Normal circulation was also restored.

According to the Territorial Delegation of Development and Housing sources, the notice was activated by the Junta de Andalucia as a mandatory use of chains at this location between 10:50 and 12:00.

A yellow warning will be issued by the State Meteorological Agency, Aemet, for the region of Cazorla/Segura due to snowfalls that could cause snowfall of up to five centimeters in 24 hours at elevations above 900m.

‹ ›
Keywords:
ObligatorioCadenasPuertoPalomasCazorla
Your comment has been forwarded to the administrator for approval.×
Warning! Will constitute a criminal offense, illegal, threatening, offensive, insulting and swearing, derogatory, defamatory, vulgar, pornographic, indecent, personality rights, damaging or similar nature in the nature of all kinds of financial content, legal, criminal and administrative responsibility for the content of the sender member / members are belong.
Related News