The sun just didn't come up. 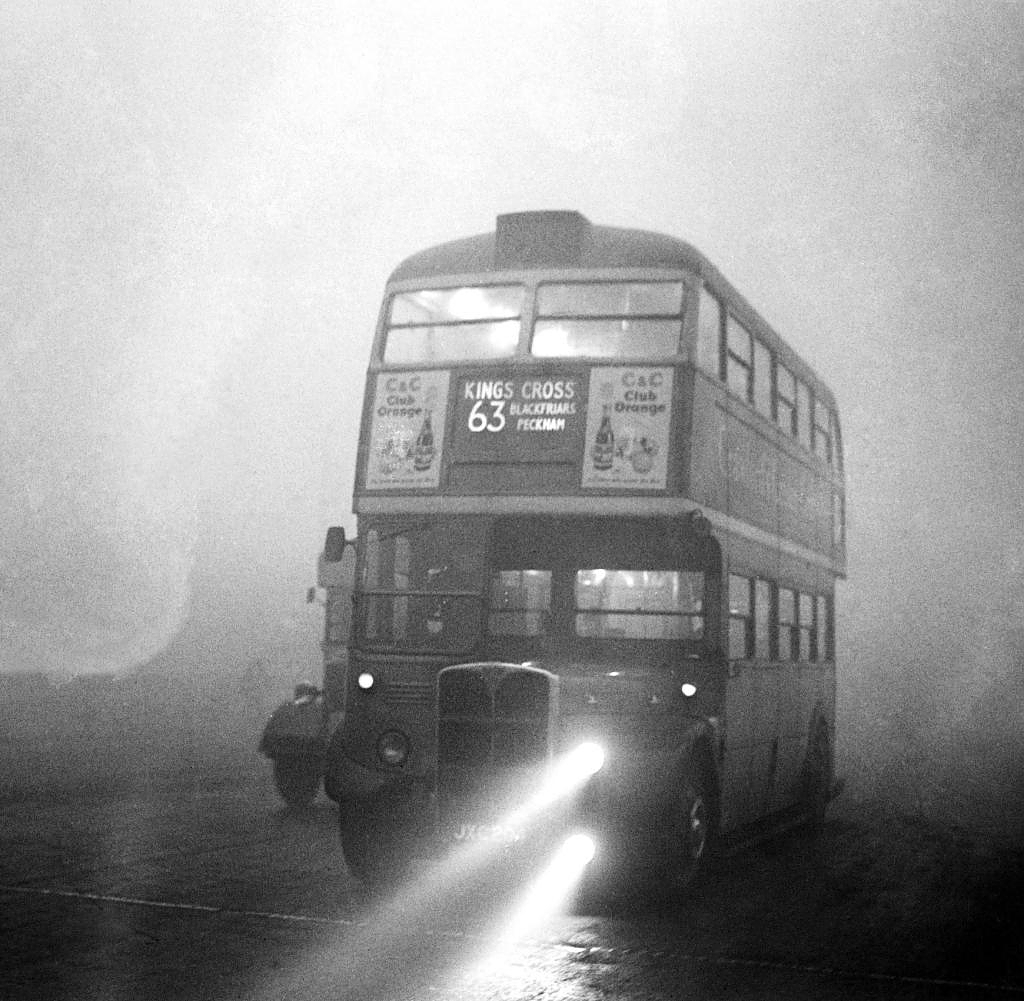 The sun just didn't come up. "The residents of London and large parts of England waited in vain for daylight on Friday," reported WELT in the Saturday edition of December 6, 1952, adding: "A dense fog, the worst of the whole year, mixed with the smoke from the factory chimneys, took every view and brought all traffic to a standstill.”

Nobody knew how bad it would really get. Because almost no natural light reached the British capital on St. Nicholas Day, nor on December 7th and 8th. Only on the fifth day did the rising wind loosen the dense, stinking fog again.

“I wanted to cross a very wide street and walked slowly. After about ten minutes I didn't know where I was anymore. In the end, I ended up on the same side I started from,” recalled a contemporary witness. Buses and other vehicles had to drive at walking pace - often behind a conductor or passenger who showed the way on foot.

Eleven magnificent oxen, the finest and best in the country, choked, they had been sent to London for the Smithfield Show, the famous cattle show. In the densely populated east of the city, people had trouble seeing their own feet. Even indoors, visibility was so foggy that theatrical performances had to be canceled: audiences could no longer see what was happening on stage. The only aid proved to be fabric masks, which at least filtered the coarser smoke particles from the inhaled air.

The first reports of the consequences did not sound too worrying: "According to police reports, around 160 lives have fallen victim to the thick fog that has hung over London for the past four days," WELT reported on December 10: "Especially older ones People with ailing respiratory tracts suffered from the fog, which was enriched with coal dust, soot and acidic fumes. The English medical profession stated that in many cases death was practically due to asphyxiation.” In addition, more than 300 traffic accidents occurred during the dense fog in the city, resulting in many more deaths, many injuries and major property damage - because the drivers just hadn't driven at walking pace.

However, the figures initially given were far too low. Careful investigations in the months after the events of December showed: In the one week of what is now called “The Great Smog” with a made-up word from “smoke” (English for “smoke” (English for “smoke”) and “fog” (English for “fog”) Around 12,000 residents of London died as a result of the phenomenon - more than would have been expected based on previous years. About 100,000 more patients than usual had to be treated; young children and the elderly as well as people with cardiovascular or respiratory diseases were particularly badly affected.

"Everywhere people were overcome with nausea," reported an eyewitness: "They just fell down and couldn't breathe anymore." Clinics and doctor's offices were overcrowded, and the ambulances also stopped. "Many people couldn't make it to the hospital and died outside the doors," recalled a doctor. The victims' blue lips showed that they had been smothered.

Polluted air in London, the largest metropolis and at the same time the most important industrial location in Great Britain, was nothing unusual in itself. And in the winter, that could come to a head for decades, when certain weather patterns made it difficult to clear the smoke from traffic, stoves, and open fireplaces. “This English fog is one of the scariest natural phenomena there is,” the “Hamburger Abendblatt” explained to its readers on December 10, 1952: “Every Hamburg 'laundry room' is a light little affair compared to London's 'pea soup', eh the residents jokingly call it. The fog is thick and heavy on people and animals.”

But what happened in December 1952 went far beyond the ordinary "pea soup". There were several reasons for this: A stable high-pressure zone had formed over the south of England, into which very cold air flowed on the ground, while in the higher layers unusually warm temperatures prevailed for the time of year. But since warm air rises, not cold air, the natural exchange of air failed. This "inversion weather pattern" trapped smoke and exhaust fumes like a cheese dome - with London underneath.

Underneath it continued to smoke. With Britain nearing bankruptcy after the efforts of World War II, the high-grade coal from the North's mines was sold on the world market, while residents burned low-grade lignite in their furnaces. Since it was unusually cold in early December 1952, the heaters were on day and night. In addition, in the early 1950s, the city administration replaced the previously electrically powered trams with diesel-powered buses. Because of the weather, London's coal-fired power plants were running at full capacity, and the exhaust gases from the industrial plants were hardly filtered. The perfect scenario for a disaster.

On December 9, 1952, British scientists declared that they "were unable to oppose this force of nature". They did invent a way of clearing the airfields from fog for a short time - by burning thousands of liters of petrol. But the metropolis of London could not be helped in this way - especially since there was not enough petrol and the exhaust gases would have made the situation even more difficult.

The government could therefore do little in the short term. Prime Minister Winston Churchill, already 78 years old, confessed: "I can see little splendor in a world empire that can rule the waves but cannot clean up its sewage." But it was not until 1956, after his second and last term in office, that the "Clean Air Act" passed a law that set rules for improving the air and limit values ​​for exhaust gases. But it was not until 1962, again at the beginning of December, that the “Great Smog” had to be repeated – albeit not quite as badly – ​​before air pollution control became a priority.

‹ ›
Keywords:
LondonSmogChurchillLuftverschmutzungWinston (Politiker18741965)
Your comment has been forwarded to the administrator for approval.×
Warning! Will constitute a criminal offense, illegal, threatening, offensive, insulting and swearing, derogatory, defamatory, vulgar, pornographic, indecent, personality rights, damaging or similar nature in the nature of all kinds of financial content, legal, criminal and administrative responsibility for the content of the sender member / members are belong.
Related News