<<We have all been scared by the noise, we thought it was going to be worse>>

Yesterday, Sunday was a busy day for the workers at Poniente Hotel Restaurant. 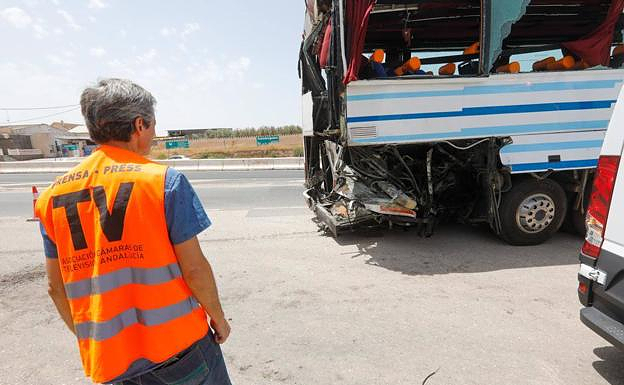 Yesterday, Sunday was a busy day for the workers at Poniente Hotel Restaurant. They were ready to start the breakfast service at five in the morning. Everything went as normal. The Repsol gas station is less than ten metres away, as well as the A-92. "There's a lot of traffic here in the morning. It is not a deserted road. They said that there are many buses that run at night."

The calm of dawn disappeared in an instant at 0545 hours. "We were quite afraid. According to the hotel workers, the noise was overwhelming. They explain that they have a large terrace which overlooks the A-92 section where the traffic accident happened. "The first thing that we felt was a tremendous shock. He remarked several times, "Tremendous!" "We were all quite afraid by the noise. We thought it would be worse."

They looked out onto the terrace in order to find the source of the noise. He explains that it was dawn so their vision wasn't clear. "After the initial collision, which would have been the one that made a tremendous sound, we saw other collisions between vehicles in a chain," he says. "We have felt every hit." "We are approximately ten meters away from the site of the collision, and it can be heard perfectly."

He says that a caravan has formed since then. It was once a large accumulation of cars. There were acts of noble citizenship. They explain, with their hair standing on the end, that someone has stopped their vehicle and has gotten out to use the light from his phone to slow down the cars. Many others also stopped their vehicles and assisted the injured.

One person was killed in the accident (the driver of the bus), while seven others were severely injured and 28 were slightly injured in the collision of two passenger buses. The incident occurred in Granada municipality, Moraleda de Zafayona. This was reported by Emergencies 112 Andalusia, and the Civil Guard.

Maria del Carmen Cantero (the mayor of the city) pointed out that buses were coming from Madrid to Algeciras, Cadiz. The majority of the passengers were foreigners who had crossed into Morocco as part of Operation Crossing the Strait (OPE).

Three of the victims are minors, and they were treated in Pediatric Emergencies. Two adults were admitted to an Intensive Care Unit. The Junta de Andalucia, Granada Health Department reported this. The three minors were aged 18 months, 8 and 11 years respectively. They received help in the Pediatric Emergency Department at the San Cecilio Clinic. They remained stable in an observation area.

Concerning those admitted to ICU, they were admitted to the Virgen De las Nieves neurotraumatological hospital in serious condition. Nine patients were treated in the same hospital for the same incident. One of them had surgery. Five patients were kept under observation, three received consultations, and two were discharged. The third minor, aged ten years, is slightly injured.

The Hospital Universitario Clinico San Cecilio treated 21 patients. 17 of these patients had injuries of different degrees. They range in age from 15 to 62. A 70-year old woman was waiting for surgery to fix a bone fracture.

Five wounded were finally treated in the Loja Emergency Department of the High Resolution Hospital. Three were discharged, while two others were referred to San Cecilio.

It happened just minutes before 6:00 AM yesterday, Sunday. Several citizens dialed 112 to report that two cars and buses collided at Kilometer 210 of A-92 in Malaga.

Alerts indicated that several people were injured and trapped in the vehicles. One of the buses sustained severe damage to its nose, and several windows were also damaged. The Traffic Civil Guard, 061, Civil Protection and Firefighters were immediately activated.

‹ ›
Keywords:
AsustadoRuidoPensabamosPeor
Your comment has been forwarded to the administrator for approval.×
Warning! Will constitute a criminal offense, illegal, threatening, offensive, insulting and swearing, derogatory, defamatory, vulgar, pornographic, indecent, personality rights, damaging or similar nature in the nature of all kinds of financial content, legal, criminal and administrative responsibility for the content of the sender member / members are belong.
Related News